Frame Rate - and why it matters?

In this article we take a first look at the subject of frame rate – what it is and why this should matter to any content owner, producer or distributor? 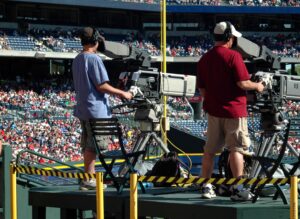 When we watch a movie, a television broadcast or a video stream via our mobile devices we are presented with a series of pictures (or frames) in quick and regular succession.  We commonly describe the rate of presentation in frames per second (fps).

Persistence of vision is generally agreed as the reason we interpret a sequence of image snapshots as a continuous video sequence. At higher frame rates content e.g.  50 or 60 fps, we tend to perceive a more continuous and smoother motion than for lower frame rates.

So why don’t we just shoot everything at a higher frame rate?

Much of this is about history and how frame rates have evolved. For example, cinematic features still tend to be shot at 24 fps mainly for artistic reasons as this is the “look and feel” the cinema audience have come to expect.

We should also consider that in digital content chains, there is a direct relationship between frame rate and the amount of data to process and move around. Frame size, resolution and compression are also part of this equation.

The key point is that there are many different frame rates in existence – some standard and some non-standard. You may be in a position to choose your ideal frame rate or you may have to handle the situation based on what you are given.

Which standard frame rates are you likely to meet?

Different standards have been introduced over time but usually the content production, post and distribution teams only need to worry about a handful of frame rates – traditionally 23.98, 24, 25, 29.97, 50, 59.94 and 60 Hz. If we could acquire, produce and deliver at the same and only the same frame rate then this would be all be quite straightforward – but this is rarely the case.

Within a project there can be many sources at different frame rates which need to be combined. Even when normalised to a master frame rate, the final program may still require many multiple frame rate versions for different target audiences. The most obvious examples are live events and breaking news, where the originating content needs standards conversion for international broadcast.  It is important that your equipment and applications can handle conversion requirements as they arise.

What are examples of non-standard frame rates?

Non-standard frame rates, and how you might handle them, present an additional challenge. This can happen when integrating user generated content or content edited by less experienced production houses, where projects may have been set up using approximate frame rates.  It’s remarkably common to discover content at exactly 23.98, 29.97 or 59.94 Hz, whereas in fact the standards for these fractional frame rates are 1000/1001 multiples of integer numbers i.e. 24/1.001, 30/1.001 and 60/1.001.

Any producer wanting to integrate archive footage into a production will be very aware of non-standard frame rates.  Archive footage can be anything from 14 to 22 fps.  Hand-cranked film can be variable frame rate, but mechanically cranked films are often 16 or 18 fps.  Such film may have undergone an earlier transfer to 24 fps which may have had the effect of speeding up the motion, and careful processing may be needed to revert to the original frame rate.

In summary, there are many frame rates out there so when choosing a professional conversion product, make sure your solution (such as FrameFormer from InSync) is unrestricted in the range of frame rates it supports and allows a user-definable frame rate, so that you can include any material into any project.

Manage Cookie Consent
To provide the best experiences, we use technologies like cookies to store and/or access device information. Consenting to these technologies will allow us to process data such as browsing behaviour or unique IDs on this site. Not consenting or withdrawing consent, may adversely affect certain features and functions.
Manage options Manage services Manage vendors Read more about these purposes
View preferences
{title} {title} {title}